Maria works internationally as a contralto singer in concerts and opera, in a repertoire ranging from baroque to contemporary music.

After her soloist diploma studies at the Royal College of music in Stockholm 2004, she freelanced mainly as a concert singer for a few years. A production of Mozart's the magic flute in Dalhalla, Sweden, in 2009, where Maria sang the part of the 3rd Lady, made her realise how much she loves also working with opera. This inspired her to also take a masters degree at the University College of Opera in Stockholm (2010-12) in order to fully include also the opera stage in her work field.

Before finishing her studies, she got the title role in Handel’s Giulio Cesare at Folkoperan 2012. This was followed by another title role at the Drottningholm Court Theatre: Il Giasone by Cavalli, which was her exam production from the school.

Maria made her debut at the Royal Opera of Stockholm, as Elizabetha in Dracula 2017 and comes back spring -22 in "Short Stories" (Taro by T Helander and  Min tur nu by M Lithell Flyg).

2018 she performed at Malmö Opera in Var är du Proserpin? as Pluto and on the concert stage she was a soloist for example with the Eric Ericson Chamber Choir at the Stockholm Concert Hall in "Journal" by Vivier. Spring -19 and -22 she sang the part of Eva in Comedy on a bridge by Martiù at Malmö Opera, where she returns in the autumne as Budgie (Swe. Undulat) in Väntarna by Werle.

She has also recently appeared for example at Folkoperan in Stockholm in the critically acclaimed performance  "Ligetiland” (in Ligeti’s piece ”Aventures” - semi staged), in concerts at Poznan Baroque Festival (with the ensemble Kore in music by Händel, Vivaldi, Scarlatti and Pergolesi) and at Opera Rara in Krakow (with Arte dei Suonatori in J.A Hasse’s serenata Marc’Antonio e Cleopatra).

Within the opera repertoire Maria's earlier performances include  the world premiere of Carl Unander-Scharin’s opera The Elephant Man at Norrlandsoperan,  a continued collaboration with this composer in the performance ”Sing the body electric” which was performed in Stockholm, Sweden, and in Cape Town, South Africa, (this performance featured interactive, electronic instruments, which the singers controlled with their choreographed body movements – see a video example from another, similar performance called Extended Opera down to the right on this page) she also sang the part of Clizia in Ristori’s opera Calandro at the Musikfestspiele Potsdam Sanssouci, Germany, and in two productions of newly written operas at the International Vadstena Academy; 2003 in Byrgitta by Carl Unander-Scharin and 2004 in Planet Opus Opera by Staffan Lundén Welden.

Maria has a long experience as a concert singer and with an extensive repertoire. She is especially well aquainted with the oratorio repertoire, but also songs with orchestra, lieder and chamber music. 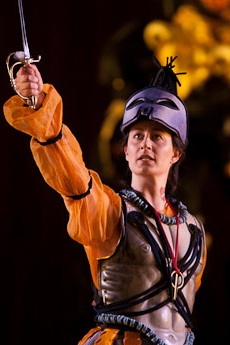